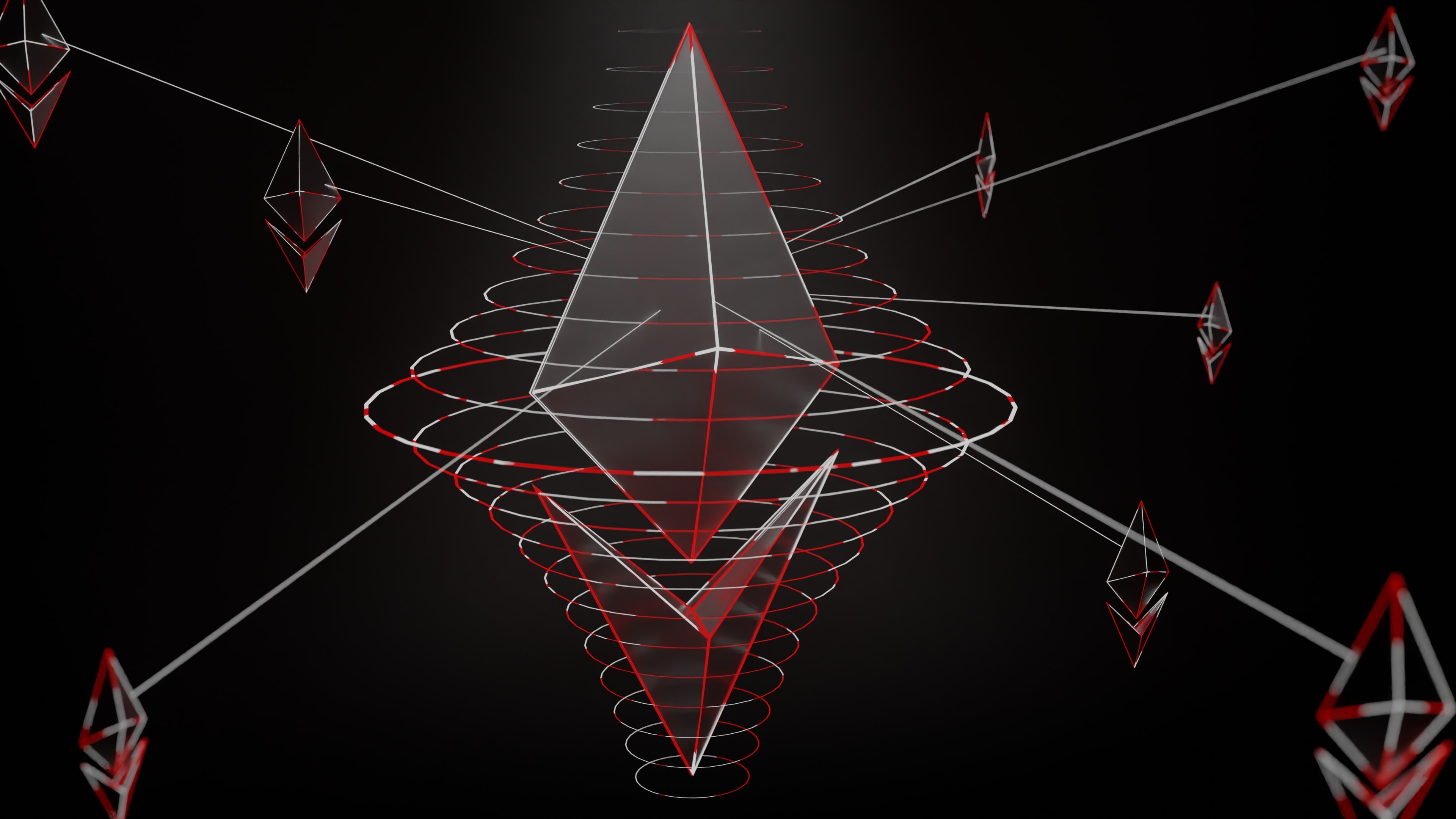 What is Ethereum Layer 2? A Simple Guide for Artists, Collectors and Gamers; Arbitrum vs Optimism

What is Ethereum Layer 2? A Simple Guide for Artists, Collectors and Gamers; Arbitrum vs Optimism

Listen to this Article

If you're reading this, then chances are that you've heard of Ethereum. But what about Layer 2? In the Ethereum ecosystem, Layer 2 (L2) is an emerging solution that is quickly gaining popularity among artists, collectors, and gamers on the blockchain because of how efficient it is at getting YOU significantly lower gas fees, and much faster transaction times than mainnet Ethereum. Let's take a closer look at what Layer 2 is, why it matters, and what platforms you should be keeping an eye on.

You can think of Ethereum as a giant virtual highway. When the Ethereum blockchain was first built, it only had ONE road to drive all virtual traffic of blockchain activity -- this is Layer 1 (L1). As you can probably guess, having ONE road to drive on sucks both in real life, and on the blockchain, especially during rush hour. (And it's basically rush hour all day everyday on Ethereum, but I digress...)

Everyone on the Ethereum highway has to wait in virtual traffic for their transactions to go through, whether they're transferring funds between wallets, buying a piece of digital art, or playing a blockchain game. That's because Ethereum has now become a huge and extremely powerful blockchain where all sorts of incredible things are happening. It's time to add some more lanes to that virtual highway!

This is where Layer 2 comes in. You can think of every layer of Ethereum as another set of lanes that are helping to ease traffic congestion on the blockchain. More so, it seems like each Layer 2 solution is slowly specializing to better serve one use-case versus another, but more on that later.

What are the benefits of Layer 2?

Alright, so a multi-lane highway is simple enough. But is there a good reason to use Layer 2 instead of Layer 1? Well, I can think of at least two that you'll frequently hear people talk about: faster transactions, and lower gas fees.

If you're an NFT artist or collector, these two reasons alone can be compelling enough to make the switch. Gas fees on the ETH mainnet are insane -- many people have to spend hundreds of dollars on platforms like OpenSea to simply buy a work of art. Sometimes, the gas fees are more expensive than the artwork itself! This makes being a creator on Layer 1 via OpenSea especially difficult, as it costs money to even get your work listed, let alone purchased. This is money that could be going towards your wallet, or another purchase.

If you're a blockchain gamer or developer, faster transactions and lower fees are also a game-changer. (Pun intended.) Blockchain games are hit especially hard by the transactional nature of the Ethereum ecosystem, as some simple things like buying new clothes and items for your avatar can quickly become cost-prohibitive. More so, employing actions that are part of a game like customization and rewards collection can start to add up, making many blockchain games  too expensive to play.

Aside from these two key reasons, however, one benefit of ETH Layer 2 that I don't want to understate is the fact that all ETH L2 solutions are part of Ethereum. They are not alternative chains -- they are Ethereum. This means that L2 solutions still maintain the sophisticated security measures of the mainnet, and are fully decentralized. As stated by the Ethereum Foundation:

"[Layer 2 inherits] the security properties of Layer 1 while performing execution outside of [it.]"

This is a key point, as many folks will look at alt-chains such as Solana as potential alternatives to Ethereum's Layer 2 solutions, without realizing that although these alternative blockchains may have similar benefits, they do not have the same technical security as Ethereum. They are not part of the Ethereum ecosystem.

Part of the reason that Ethereum Layer 2 can achieve some of these aforementioned benefits is because it's still quite early for the ecosystem. There aren't nearly as many people transacting on Layer 2 just yet. So, NFT artists and creators might reasonably ask: "Well, isn't Layer 1 better if I'm trying to sell art, or launch a project? Seems like that's my biggest market of potential collectors, right?"

That's true! But I think that since Layer 2 is such a rapidly growing ecosystem, one of the biggest benefits of several Layer 2 solutions (especially for NFT artists and collectors) is simply getting in early. The ETH mainnet's biggest crypto and NFT whales are people who simply arrived early to the party -- they bought up blue-chip NFTs on a whim and completely forgot about them, only to find out years later that they've skyrocketed in value.

Now, this isn't to say that the same thing will surely happen for NFT collections on Layer 2, but I think that when you consider the landscape that many platforms, games, and collections are facing with slow transactions and high fees on L1, it's only a matter of time before they seek out cheaper solutions. Those solutions are already here, and only waiting to be picked up by the next big thing. By getting familiarized with Layer 2 early, you're positioning yourself to reap the benefits. (And for less gas!)

What are some examples of Layer 2 solutions?

There are already several Layer 2 solutions out there. I've found that although L2's are easing congestion on the mainnet by providing a new lane for blockchain platforms and users to execute the same transactions, many L2 solutions are quickly specializing to fulfill specific needs.

Rather than trying to be a one-stop shop (which is what makes mainnet so expensive), L2 solutions are finding their stride by catering to specific types of transactions. Here's how:

Launched just last year in May 2021, Arbitrum is one of the very first "optimistic" L2 solutions on Ethereum. "Optimistic" refers to how the platform treats transactions -- Arbitrum essentially assumes that all transactions are valid, unless challenged by someone on the network within a certain amount of time. Sort of like "innocent until proven guilty," this method of validation is "optimistic" because it is happily assuming that no one is lying. (How nice!)

Arbitrum first got on the map thanks to its partnership with Uniswap. Uniswap is a coin index tool where traders can buy, trade, and monitor the value of different cryptocurrencies -- a decentralized financial (DeFi) index for crypto coins. As such, Arbitrum has started to make a name for itself among platforms and developers in the DeFi space, and seems to be specializing to that end.

Also known as "Arbitrum One," this protocol supports various crypto wallet providers, decentralized apps and tools, as well as blockchain bridges. Most of these applications are geared towards finance, although Arbitrum does support two upcoming NFT art marketplaces. As of January 2022, Arbitrum supports:

Arbitrum is venture-backed, and is run by Offchain Labs. This is a for-profit corporation that is scaling Ethereum with this Layer 2 solution, so I would imagine that some if not all of their profits are going right back to their VCs. Not the worst thing in the world, but there are certainly many other projects that are more focused on returning that value to the communities they're fostering instead.

Also launched just last year, Optimism went live in December 2021. Although the Optimism protocol is still quite new, it has quickly built a considerable portfolio of dApps helping to scale the Ethereum network. Similar to Arbitrum, Optimism is an "optimistic" L2 rollup, meaning that it validates transactions in a similar way. Where they differ is in how they resolve potential disputes over blockchain transactions.

Not only that, but Optimism touts the ability to deploy Ethereum code and projects with only one-click -- meaning that developers launching projects on Ethereum mainnet are easily able to launch the same code on Optimism without the need for customization. Although I'm no developer, I think that is one key differentiator for the platform versus Arbitrum, as the Optimism protocol's simplicity and efficiency in this regard will only make it easier for developers on Ethereum to make the jump to L2. That is critical for platform adoption!

Currently, Optimism supports a variety of decentralized apps and tools, as well as several NFT art projects, DAOs, and even a blockchain game. At such an early stage of its mainnet deployment, it seems like Optimism is gearing itself less towards DeFi implementations, and more towards mass market projects. As of January 2022, Optimism supports:

One other thing to keep in mind about Optimism is its funding model. Although the project is venture-backed (like Arbitrum), it is classified as a public-benefit corporation. As such, outside of the necessary revenue needed to fund the Optimism protocol, all other profits are allocated towards "public goods" on the Ethereum blockchain.

Public goods are any resources or projects that benefit everyone in the community -- as a real-life example, this would be how US tax dollars are (supposed) to go towards public roads, parks, and schools. In the world of the blockchain, public goods can look like transaction ledgers such as Etherscan. (We all use it, but don't actually pay for it. How else can Etherscan make money? Well, this is one way.) These funds are governed by a smart contract, so we can be sure of where they're going. Vitalik Buterin actually published a report of Optimism's first round of public goods funding back in November 2021!

With Ethereum's mainnet sometimes costing hundreds of dollars per transaction, it can quickly become expensive and feel like a rich-person's game. Fortunately, L2 solutions like Arbitrum and Optimism have arrived to drastically reduce fees, and make it so that you no longer have to worry about blowing your budget on gas prices just because you want to buy some art, game items, or collectibles. For that reason, Ethereum Layer 2 is a great place for artists, collectors, and blockchain gamers to transact.

Not only are transactions faster and cheaper, but Layer 2 is a rapidly growing marketplace that opens up valuable opportunities for you to get in early. Now is the time to make the jump to Layer 2 and build your portfolio and launch your projects. Who knows what the future holds?  But with Ethereum's Layer-based scaling projects, I think that the future looks... optimistic!

Data analyst, podcaster, pasta-lover... I'm many things, but above all, I'm a creator. I created The Gay Pro because I love sharing stories of queer success, with the intention of empowering and inspiring other queer leaders.